As Trent and I headed along the lake side road to get back to the car, more delapidated buildings just kept showing up. At the side of the smaller of the lifts, there was a big shed like building missing a quarter of it's roof. There was no signage (save for "keep out") and a single padlocked door. The padlock was actually cut open so we went inside, it must have been some kind of machine room because it was filled with high pressure hoses and boilers and all sorts of things.....I remember reading that eden lake used to create their own snow for the hills, so the pressure hoses are probably from that, everything else is a big question mark.
The structure itself was unsound and about ready to give way to the elements. I'd give it two years, tops. 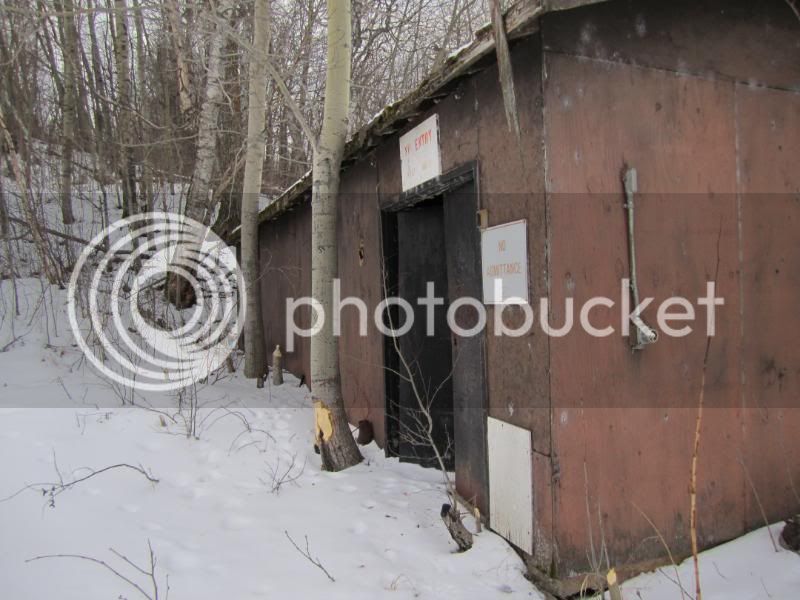 What makes it worse is that the roof caved in - just kind of made any clue as to what this was for end up in the middle of the room in pieces. This is what gets to me the most about these kinds of places. Do something with it! Sell it for scrap! DO SOMETHING with it.

The next building was a medical building, complete with red and white cross on the front (just in case you poke a ski through your lung or something) There wasn't much in it, half the roof was completely gone (plywood is not the ideal construction material) However it did contain two pretty decent looking sleds that would have really come in handy when travelling down the ski hills. Note: Get sleds BEFORE going up the hill next time around.

From outside the first aid building you get a pretty neat look at just how big the chalet building is. It's just at the top of a small but steep cliff/hill. 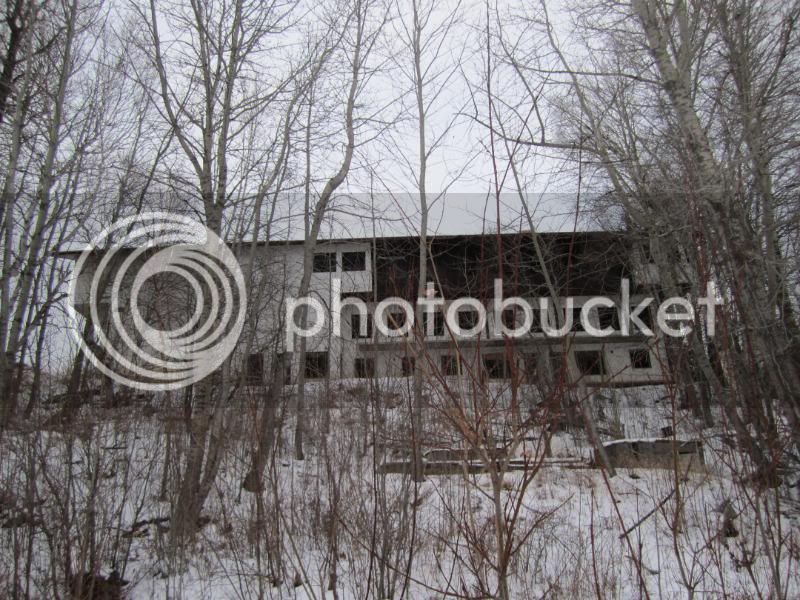 From this point, the road gets kind of closed in by a patch of trees, and yet you still see ski's or ski boots or busted machinery just laying around.

The above structure actually had a "ski blackcomb" sticker on a door at the top of those reeeeeallly rotting stairs. That's a ski hill in whistler, BC, an entire provice away. Who knows?

I tried to pick one of these boots up, and it disintigrated in my hand....I mean the plastic just crumbled like powder. 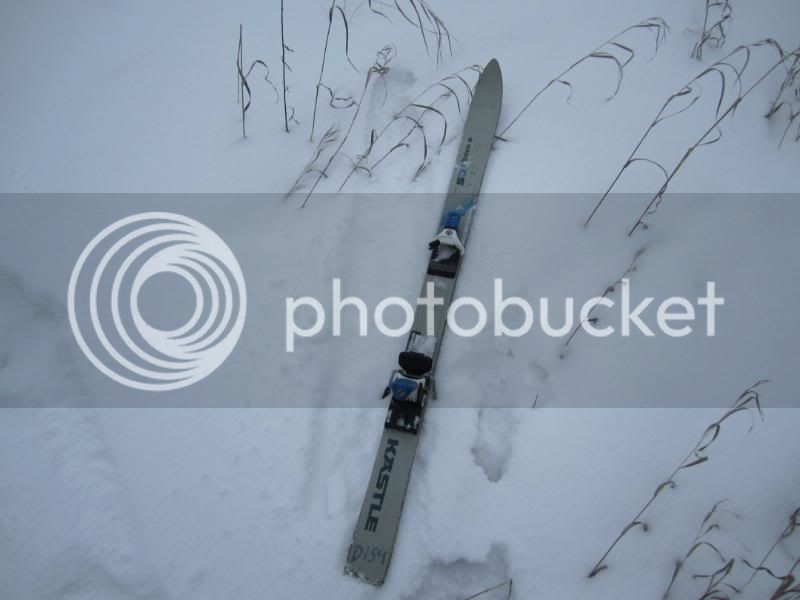 Hey, jupiter iron works canada, you left your boxy red thing out here. Don't you want it? It's was probably expensive at one point? 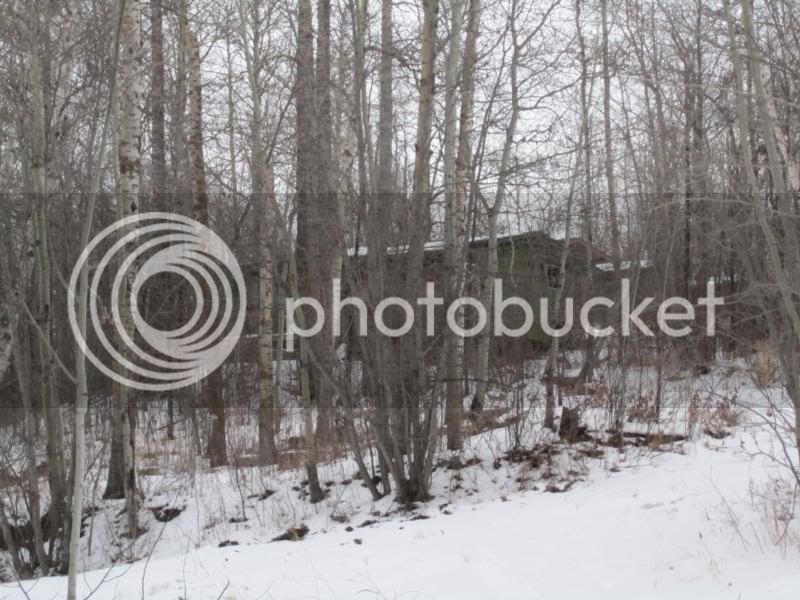 The cabins, from the other side and through some trees.

More stockpiled machinery, rusting away. I know it looks like they are new and ready to work and that someone just put these here a week or so ago.....Trust me, they've been here a while. A closeup of the key in one ignition proves it:

Notice the rust, the materials falling off off and apart.

On the left there was this house, further down a different road and closer to the lake, we didn't know if someone lived here or if this was another abandoned building, but there were people in a truck coming towards us so we didn't explore.

That concludes the day Trent Reznor and I took a trip to Eden Lake, Alberta. It was cold and really tiring and dangerous at times but well worth it in the end to document such an incredible place in the middle of nowhere, rusting and rotting away, hidden in plain sight.

I took 215 pictures that day, and they can ALL be seen without my witty commentary on my photobucket:
http://s3.photobucket.com/albums/y52/theunoticeable/Eden Lake/

Reply Crystal
3:48 AM on April 24, 2012
Matt I just have to take the time to say thank you for the time you spent and the wit you put into scribing all that you did.... The photo's both made me smile and cry all at the same time. I grew up here, had one of my first jobs serving many of a drink and food int that upper restraunt and lounge ... my children had the pleasure of knowing at least the lake and beach end of the resort. Photo's will forever be the memories within my soul ~

Reply Rosemary
11:38 AM on April 25, 2012
Matt;
This has been an incredible journey...you have created a fantastic piece for those of us who have memories of Lake Eden.
Back in the day (the late 80's) my kids took ski lessons here. It was really inexpensive - 10 bucks for rentals, lift, and lesson!!
I also went to a ladies night promotion there, don't remember the cost but it was also inexpensive and included rentals, lift, dinner and a drink.
I moved from the area in 1991 and heard that it became abandoned - it's a shame that such a vibrant resort has become abandoned and so dilapidated.

Reply Krista
12:26 AM on December 21, 2013
I never skied at Lake Eden, but my grandparents had built a cabin which I grew up going to in the summers. One of my fondest memories was finding a kitten, naming her "Pussy Willow" (I was 6, kitten was grey and had super soft fur) and "keeping" her for the few days we were at the cabin. I was heartbroken when she was claimed by someone on the other side of the lake.
Over the years, I spent many weekends at the cabin. We kayaked and canoed and swam, and played in and around the cabin, and built sandcastles and had huge family gatherings at the cabin, and roasted marshmallows at the campfire pit off of the deck of the cabin. And it is not to be forgotten - washing hair out of a basin with freezing water, and going to the bathroom (after sprinkling it with lime, liberally, the first time out for the season!).
The last time I went to Lake Eden was in the summer of 2008. I took my two sons (2 and 3 years old) for one last visit to Oma and Opa's cabin. They played; roasted hot dogs and marshmallows; had a sleepover in the cabin's loft; ate cereal at the small kitchen table; read books and played games that my mom, aunts and uncles had all played with in their summers spent at the cabin; they splashed in the water, went swimming, made sandcastles, went in the kayak, and slid down a terrifyingly unsafe and from a long-ago-era slide.

It makes me so sad to know that my kids will not be going back to that cabin, which houses so many emotional ties to my entire extended family (+30 people) and friends. ...And from the little I know about it, the business dealings which led to the eventual repossession of the cabins, (which had been built and paid for by individuals such as my grandparents), were full of shady, underhanded and certainly coldhearted proceedings.

What a crying shame.

Reply Ethan
11:02 PM on October 5, 2015
Hi there. Its ethan you know me. These are great! Pics you have here and. My dad when into great detail in to then and explaining how he's been there and telling me all there great stories of them. I can't believe this resort got shut down. The way it got shut down is that the investors providing income for the place wanted to turn it into a golf course, but the owner denied this request, therefore the investors stopped providing money to run the resort and it shut down due to the lack of money to keep the equipment running and safe.

Reply Colemancepay
7:50 AM on October 14, 2021
Our systems are verified, authenticated and encrypted by the most advanced digital security certification authority -Thawte.


I love to dress in this boutique. There are youthful and elegant things here. Once, on the recommendation of her husband, I even took 2 dresses at once
http://offeramazon.ru/bspb